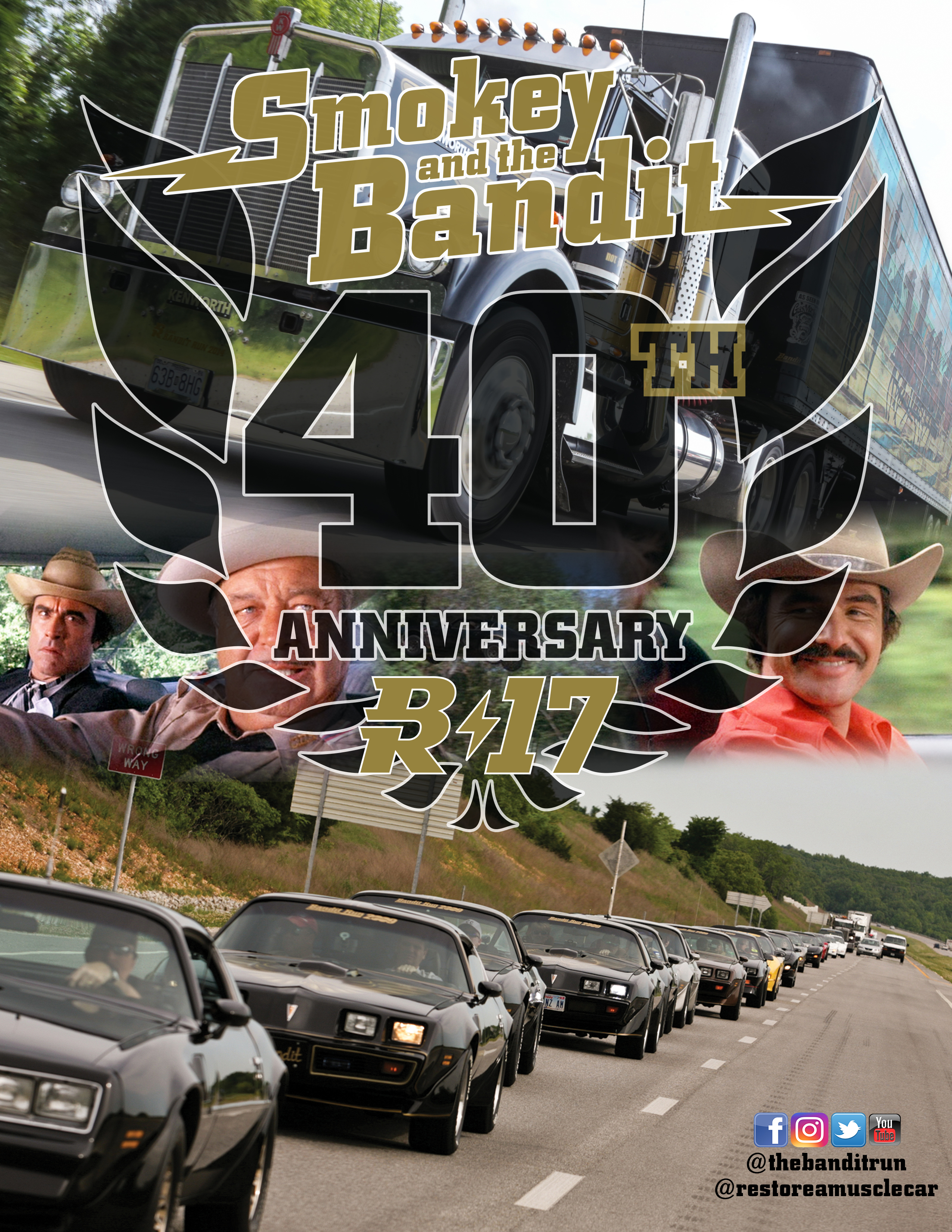 Universal Studios’ Smokey and The Bandit

SNOWMAN: Hey Bandit, me and Fred’s got a question.

BANDIT:   What do you and Fred want?

SNOWMAN: How come we’re doing this?

BANDIT:  Well why not?

SNOWMAN:  Well they said it couldn’t be done.

It’s been 40 years since that iconic conversation took place between Bandit “Bo” Darville and Cledus “Snowman” Snow in the classic movie Smokey and the Bandit.  40 years since they did what they said couldn’t be done and made the run from Texarkana to Atlanta in 28 hours hauling a load of illegal Coors Beer.   Universal Studios recently celebrated what was their second largest grossing movie of 1977 by having a limited release of the movie at select theaters across the country.   And this year, YOU can become part of a historic celebration of that milestone and become part of Smokey and the Bandit history by joining in on the 2017 Bandit Run.

This 40th anniversary Run will be a once in a lifetime experience.  The event’s timeline is packed with events that have never been done before and likely will never happen again.  For the first time ever in the history of the Bandit Run, the Bandit himself, Burt Reynolds will join the Runners for a question and answer session before the screening of the movie Smokey and the Bandit.  Alongside Burt will be Ellyn Needham, the widow of Hal Needham, world famous stuntman and the director of Smokey and the Bandit.  In addition, Burt will be reunited at the Q & A with one of his co-stars, Susie Ewing, who played Hot Pants Hilliard in the movie.  The two castmates have not seen each other since the movie premiere 40 years ago!

The Bandit Run, brought to you by RESTORE a MUSCLE CAR in Lincoln, Nebraska, is a week-long traveling car event that will let you get your classic cars out on the open road.  Because while Burt Reynolds and Jerry Reed were the human stars in the movie, playing just as important a role was the 1977 Special Edition Black and Gold Pontiac Trans Am.   Just imagine paying tribute to the all-time classic movie by loosely retracing the journey taken by the Bandit himself along with hundreds of your best friends in beautiful Pontiac Trans Ams of all years and colors.   And also in the Run will be the “Snowman’s Dream” truck, a replica of the big rig driven in the movie by Jerry Reed.  And it’s not unusual to see Buford T. Justice “tail-grabbin’” a Runner or two in a replica cop car.  This year’s Run already has over 250 registered cars and more than 500 attendees ready to hit the road.

This will be the 11th annual Bandit Run, which originated in 2007 when Restore a Muscle Car (RAMC) owner, Dave Hall and Trans Am enthusiast David Hershey decided to celebrate the 30th anniversary of the film “Smokey and the Bandit,” by reenacting the quest to drive Coors beer from Texarkana, Texas, to Atlanta, Georgia.  Subsequent Bandit Runs have traversed different parts of the country, predominately in the South and Midwest.

Saturday June 17th, most of the 250 Bandit Run participants will meet up in Texarkana, Arkansas.  The first event of the Run will be a car show presented by the Four States Auto Museum  from 10:00 am – 3:00 pm in beautiful downtown Texarkana.   At 5:00 pm the ARKLAHOMATEX Corvette Club will escort the Runners on a gorgeous drive through the back country roads to Scottie’s Grill for a night of eating, dancing, a car cruise-in and a performance from the The Moss Brothers Band – Texarkana.   Afterwards, the Runners will head back to the host hotel, the Holiday Inn Express Hotel & Suites Texarkana East.

The next morning, Sunday June 18th, the Bandit Run will hit the highway to Atlanta, beginning a journey that follows almost the same route as the group did the first year in 2007.  At 8:30am, Pontiac Trans Ams from years 1969 to 2002 and in every color of the rainbow will head out parade style from Texarkana for Greenville, Mississippi.  The Runners will stop at 10:30 am for a fuel/snack stop at the Arkansas Welcome Center at El Dorado.  At 11:00, the group hits the road again for the final push into Greenville, MS, arriving at 1:00pm at the Trop Casino Greenville for a car show, hosted by Q102 Delta. Then at 6:00 pm the Runners depart for the host hotel, Harlow’s Casino.

Tuesday June 20th, the caravan of cars, which at times will number over 250 and measure well over a mile when lined up, will roar into Birmingham/Leeds, Alabama to experience the wonders of the Barber Motorsports Park.  Barber Motorsports Park is 880 beautiful acres that are a car enthusiast’s dream.  Bandit Runners will enjoy visiting their world class museum with the world’s largest collection of motorcycles, lots of vintage Lotus and other cars.  There will be a Show Field open where Bandit Run participants can park and show off their cars from1pm-7pm. This area will be open to the public as well for free, allowing people to walk around and enjoy the fanfare with the participants.  Bandit Runners will also be able to do paced parade laps on the track.  About 5:00, the Runners will line up and will parade over to the Coyote Drive-In Movie Theater (about 3 miles away) where they’ll be showing Smokey & the Bandit at 8:15pm and offering FREE admission for all Run participants. They’ll have family friendly refreshments, Coors available for adults, and a special Diablo Sandwich Package in honor of the Run.

Wednesday June 21st starts off with a Trans Am caravan on a beautiful scenic drive through the Talladega National Forest as they head toward Atlanta.   Runners will have a lunch/fuel stop in Roanoke, AL before continuing to add another historic first to their event.  About 1:00pm The Bandit Run will join up in Franklin, GA with another Smokey and the Bandit Tribute group called Snowman’s Run.  Snowman’s Run features the 18-wheeler from the movie driven by legendary actor and musician Jerry Reed.  It was started to continue the work of Reed, who before he passed away, spent his time raising money for wounded veterans and supporting the military as they return home.  So, rolling into Jonesboro, Georgia, the two groups together will form the largest ever gathering of Smokey and the Bandit fans known to date.   Both groups will spend the next 4 days just outside Atlanta in Jonesboro, Georgia (Peachtree City area) continuing to celebrate the 40th Anniversary of the movie Smokey and the Bandit.

On Thursday June 22nd, the Runners will begin bus tours of Smokey and the Bandit filming locations in and around Jonesboro.  Later in the day, they’ll get the chance to stretch the legs of those classic Trans Ams doing laps around the famous Atlanta Motor Speedway.  There will also be photo opportunities and a Thunder Races & Cars Display while at the Speedway.

On Friday morning the 23rd, the Bandit Runners will get a chance to recreate a scene from the iconic movie in downtown Jonesboro, followed by a BBQ lunch.   About 6:00pm, the Bandit Runners will have their awards presentations just before the aforementioned showing of Smokey and the Bandit in Lee Park.  And as mentioned previously, prior to the movie there will be a question and answer session featuring Burt Reynolds, Ellyn Needham, widow of director Hal Needham, Susie Ewing (Hot Pants Hilliard) and other celebrity guests.

The week’s activities will finish up on Saturday June 24th with a Car Show and Festival at Lee Park in Jonesboro from 9am – 3pm and Susie Ewing (Hot Pants Hilliard) will be at the festival to judge the Burt Reynolds Look-Alike contest, sign autographs, and pose for pictures

FROG: “It would be better with a whole bridge”

Who needs a bridge?  Another one-time only event Saturday night during the Bandit Run is an epic re-creation of the famous car jump made by the Trans Am in the movie.   On June 24th   at the Atlanta Motor Speedway at 7:00 pm (doors open at 6:30) in special celebration and in honor of Jerry Reed and the Disabled American Veterans, Hollywood stuntman Oliver Keller and members of Stunts Unlimited– the team that created the original jump– will use a 1977 Trans Am to recreate the river jump.  Fans will enjoy several other car stunts from the movie and a pre-show performance by Convoy, the Atlanta based tribute band to Outlaw Country and Southern Rock.  The Bandit Jump is being produced to raise a goal income of $1 million of combined proceeds from the event and an online crowd funding campaign to support American Veterans.

In addition, this year’s Bandit Run will also be raising money for Camp Quality USA.  Camp Quality serves children with cancer and their families by providing year-round programs, experiences, and companionship at no cost.  Camp Quality promotes hope and inspiration while helping children foster life skills and develop their full potential.

Although the stars of the Bandit Run are the Pontiac Trans Ams, everyone is invited to join in the fun no matter what they drive.  For more information on routes, schedules or to register to join in the celebration, go to www.thebanditrun.com.  And if you can’t attend, follow along this special 40th Anniversary of Smokey and the Bandit on the Bandit Run’s Facebook page at https://www.facebook.com/groups/811216475623797/

You can also follow along on the Bandit Run App, for iPhone or Android.

For more information on the Bandit Jump — https://www.facebook.com/thebanditjump/

A bullet-point itinerary of the week’s activities follows below this press release.

Media:  For more information or to set up interviews or pictures with Bandit Run participants, contact Dave Hall at 402-730-4719, via email at banditrun@restoreamusclecar.com or Lori Hershey at 817-320-5228, via email at thebanditrunmedia@gmail.com.

For more information on routes, schedules or to register to join in the celebration, go to www.thebanditrun.com.  And if you can’t attend, follow along this special 40th Anniversary of Smokey and the Bandit on the Bandit Run’s Facebook page at https://www.facebook.com/groups/811216475623797/

You can also follow along on the Bandit Run App, for iPhone or Android.

For more information on the Bandit Jump — https://www.facebook.com/thebanditjump/

Media:  For more information or to set up interviews or pictures with Bandit Run participants, contact Dave Hall at 402-730-4719, via email at banditrun@restoreamusclecar.com or Lori Hershey at 817-320-5228, via email at thebanditrunmedia@gmail.com.